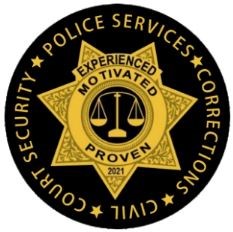 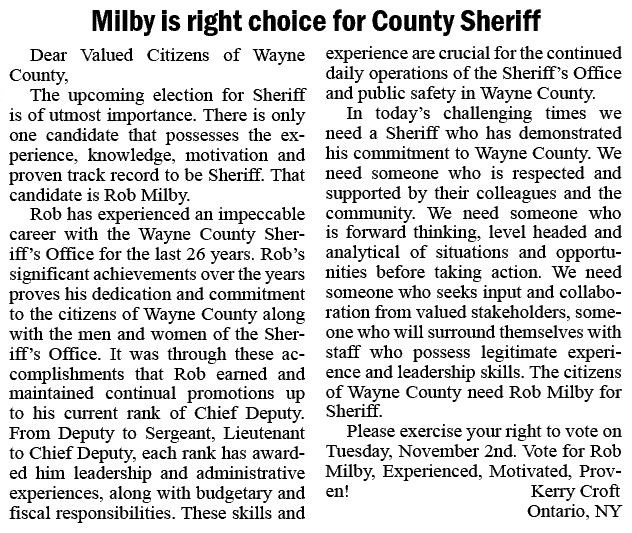 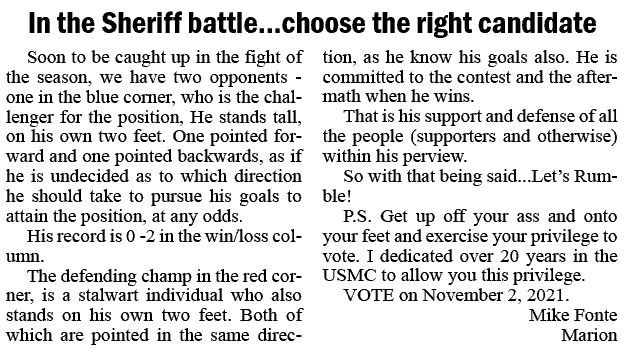 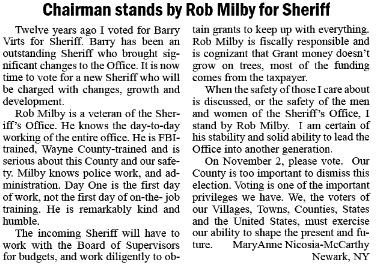 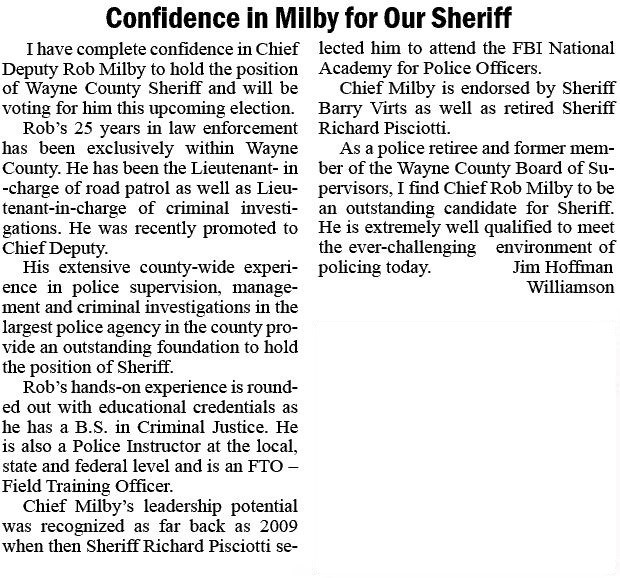 — Chairman of Board of Supervisors
Retired

I would like to take a moment to say a couple things in support of Rob Milby. I joined the Sheriff's road patrol in the early 1990s. In 1992, Sheriff Pisciotti assigned me to the Field Training Unit. I remained active and a part of the training unit through 2015, when I retired. As a member of the training unit and an instructor at the Finger Lakes Law Enforcement academy, I encountered, observed and had an opportunity to evaluate hundreds of police recruits. A handful rose to the top and taught me how to be a better Deputy Sheriff. Milby was one of those few. It was the mid 90s, Rob Milby was assigned to me as a recruit Deputy Sheriff. Throughout the term of his training, Milby excelled and was more like working with a partner than a recruit. His performance was exemplary. He did so well, the administration released him from the program several weeks early. As Sheriff, you can expect the same from Chief Milby. Throughout my tenure at the Sheriff's office, I could always count on one thing; Milby would make himself available and was willing to assist. His commitment to the profession and the people of Wayne County is beyond question.   — Alan Graham
Deputy Sheriff Lieutenant, Retired 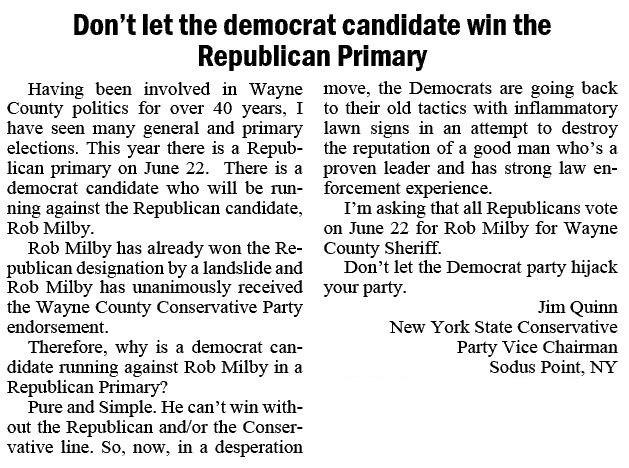 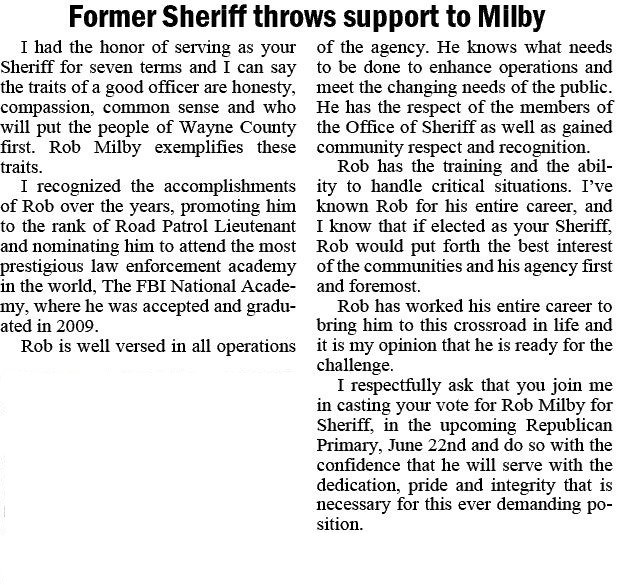 Not only are  we choosing which candidate we believe to be the most qualified to lead the Wayne County Sheriff's Office, but also which candidate best reflects our values.  Rob Milby is that candidate!  He is a proven leader who has been serving this community for 25 years......and has risen through the ranks.   — Steve Schreiber
Williamson Republican Committee Chairman

Our county has been a quiet and peaceful place for as long as I lived here which is over 40 years (Born and raised). I stayed here to raise my own children because of the environment and schools here in Wayne County. In order to have something this great, we rely on the people that serve this great county to keep it that way. The police departments are vital in providing us with the peace we get to enjoy and maintain the rights they swore to protect. I was concerned when Barry Virts was retiring and didn't know who would fill his boots. We closely watched as a few stepped forward. The one that stands out to continue our values we all share is Robert Milby. He has a proven track record that is hard to compare to anyone else and the one that we would be honored to have serve as Sheriff of this county. If you ever met him, he has to be the most down to earth guy you have ever met with a strong commitment to our county. He has been here a long time and wants to keep what we all cherish going strong and safe! — Josh Richmond
Concerned Citizen

The Executive Board of Teamsters Local 118 is pleased to announce our endorsement for you in the position of Wayne County Sheriff.  Teamsters Local 118 has many Members throughout Wayne County including those working in the Sheriff's Office Road operation and Correction's position(s).  Our Members, their Families, Friends and Neighbors depend on the Professionalism, Integrity and Experience necessary to perform the duties and accept the responsibilities in the position Wayne County Sheriff.  We are confident that you retain the qualities necessary to be successful in this vital position within Public Safety.

I know from experience that he wants to make the Sheriff's Office even better than it is.  He is pro-active and progressive.  He will hold employees to a high standard.....His history of service to Wayne County, the level of training and education, the initiative to advance and improve the Sheriff's Office while working with the community, and the ability to take the department into the future of law enforcement, all make Robert Milby the only candidate that makes sense to me.

We are going through trying times.  This will require an ethical, competent leader of good character to lead through them.  I am convinced that Lieutenant Milby can be that leader and I submit that the citizens of Wayne County will do well to choose Rob Milby for their next Sheriff.

We the people are living in a difficult period of time going forward. Rob Milby brings a solid foundation of Civility, Morality & understanding of the Law to the table. I can not predict the direction of Washington D.C. nor Albany at this juncture of time. But Wayne County needs a man of Character, therefore Robert Milby has not just my support, but my blessings. — Joseph Edwards
Instructor at Ground Zero Firearms, Counselor, Mentor, Coach, and Concerned Citizen

This man is leagues ahead of the other candidates. The other candidates are good men, but for many reasons, Candidate Milby has more to offer this county than the others. I have heard them all speak. It was an easy conclusion.  — Richard Bebernitz
Ontario Republican Committee Chairman

Thank you for signing up!

Milby will be Wayne County's next 'top cop'

Sheriff's Race-the One to Watch

Milby knowledgeable, has had impeccable career